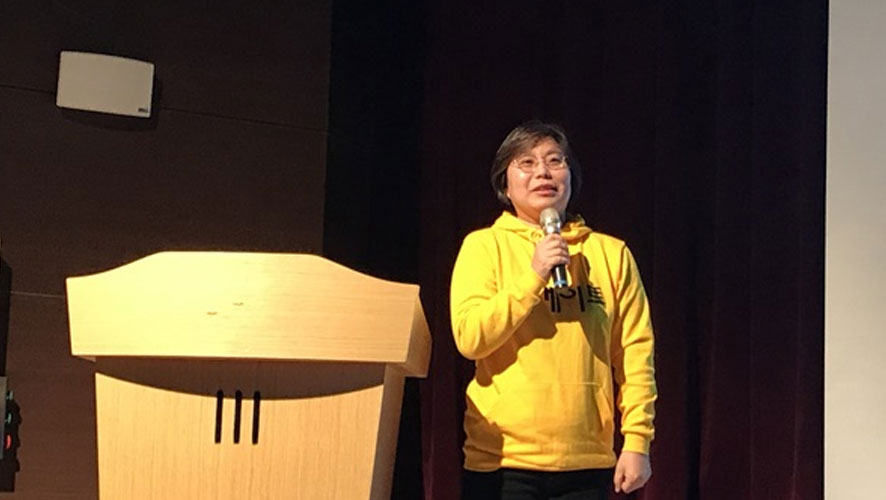 On December 15th, 2018, ‘Indie Game Awards 2018’ was held on the first floor of the Pangyo Startup Campus in Gyeonggi-do, hosted by the Korean Indie Game Association and organized by Inditor.

The theme of this event was: Interchange between indie game developers. Before the award ceremony, a seminar was held. In this seminar, tips and useful information were provided on areas of game localization and profit model which indie developers face problems in.

In the ‘Indie Game Awards 2018’ seminar, Park Yong-duk, one of the team managers at BOBGATE, mentioned some key points that indie game developers should consider for global localization. She stated that localization should not be considered as a simple script translation, but rather, as the first step toward the target market.

Localization is commonly viewed as a process that only involves simple text-to-text translation, a mechanical transference of words from one language to the other. However, localization in the gaming industry involves much more; translation of text from the source to the target language is only a part of the process. Localization providers must perfectly convey the character’s personality and the concept of the game’s universe so that the audience of the target language can fully experience the game.

However, some providers still approach the localization process with the mindset of ‘As long as it makes sense and it’s written in the target language, it will work.’ What these providers fail to realize is that a good game translation is not just a text-by-text transference of words. A good translation is achievable only when the provider possesses a good understanding of the target language, the culture of the target market, and the game. Manager Park described this as a necessary part of ‘Globalization,’ a quality which the providers must possess to enter and succeed in the global market, rather than in one specific region.

For example, how would foreign users react to poor translation which screams: ‘but you can understand what we wrote, right?’ Manager Park asked the audience to think of foreign games that were poorly translated into Korean. One example she mentioned is the “Romance of the Three Kingdoms” game series. Since the series is an extremely well-known classic in Korea, as long as the translation manages to describe the context, most of the users would have no trouble understanding the narrative.

But imagine this: In the conversation between Liu Bei and his son, Liu Feng, Liu Bei says to his son: ‘Hey, Mr. Liu Feng. Go fight this battle.’ Users will laugh, and may even be enraged at the abysmal translation. Normally, such translation would be perceived as a poor translation, but Manager Park claimed that things are not as simple as they seem. This issue could have been an issue of variable placement from the developers, not the translation itself, Manager Park added.

This could’ve been the case where Liu Bei and Liu Feng’s names were processed as variables within the game, and translators had difficulty placing lines appropriately. This incident shows why it’s important to provide information such as string IDs and variables to the localization team. The developers must also provide as much information as possible on the reference to prevent errors like the example above.

When mistranslation is frequent, it may be that the translator is attributable to the errors, but it could also be because the translation company lacked information on the file/script or gameplay. Without knowing where to place certain dialogue or which line will appear in which situation, awkward translations are bound to occur. If the translation team is not aware of variables such as character name and title, the developers may find bizarre sentences where it starts with honorifics and ends with slang in the final translated text.

To prevent this, most translation companies employ the process of checking the translation applied on the build first and edit their translation as they progress. Manager Park pointed out that although quality assurance (QA) is an essential part of a localization process, the gaming industry tends to look over this aspect. Park stressed that QA is as important in localization as how it is important in game development. The awkward sentences we saw above stopped us from getting immersed in the game and sometimes even stops us from playing the game. This is the same case for any language, not just in Korean.

The worst-case scenario during the localization process is when they have to redo the whole process, like the game, ‘Darkest Dungeon.’ The mistranslation was so infamous that it became a meme among Korean users. For example, in the very first sentence of the game, “Ruin has come to our family,” the word ‘ruin’ was translated as ‘remnants’ instead of ‘destruction.’ Inappropriate translation such as this takes a long time to fix that it is much more economical to redo the translation from scratch.

However, since re-translation is often requested on an extremely tight schedule, there is less time to finish the project compared to the very first translation. In such cases, since consistent tests are necessary to ensure quality, the extra cost is unavoidable. Hence, to prevent such incidents, it is crucial to select a capable localization company and make sure that they have enough time and information, Manager Park stressed. As the time and money needed for QA and edits increase, it will take an extra monetary toll on the game companies.

Manager Park also suggested prioritizing languages based on the preference of each market to reduce costs. For instance, even if the game is only translated into English but has good gameplay or appeal, users in countries such as India or certain European countries may be open to playing the game in English. In such cases, the company may proceed with translation slowly. However, in a market where the demands for translated content are high (e.g. China, Taiwan, Middle East, and SEA), it is necessary to translate the game to enjoy a successful launch.

The questions developers most frequently ask localization companies are: 1) How much does it cost to translate a game? 2) How long does it take to translate a game? 3) What kind of person would excel at game translation? Regarding these questions, Manager Park explained that it all depends on the type of service the client wants, and since the amount of text to translate determines the cost, it is recommended that studios are aware of the length of the script.

As for the translation period, the schedule is decided when the number of project participants is confirmed. Meaning, if a good number of people are assigned to the project, the translation will be finished faster. However, there is a risk that this method may compromise the quality of the translation. Since different people are working on the project, there may be incoherency in terms, tone and style, and depiction of the setting. Manager Park advised the developers to commission the work to a localization company with skilled translators capable of providing a tailored translation, rather than trying to translate the game hastily with a mass of inexperienced people for the sake of translation quality.

Some retort that perhaps it’s not necessary to spend time and effort in translation and localization as foreign users will eventually find a way to enjoy the game regardless of translation if the game is good enough. To this, Manager Park asked the audience to think about the comment domestic users make when foreign AAA games are released in Korea. Just as Korean users immediately comment, “When is the Korean version coming out?” foreign users also wish to know when the game will be released in their language. Manager Park concluded the seminar with a remark that everyone, regardless of their nationality, has the desire to play a foreign game in their language with a quality translation, and that it is possible to reach a larger audience by placing more effort into translation.

BOBGATE ensures the successful outcome of clients’ projects with our 20 years of globalization and localization experience.
BOBGATE strives to become a reliable partner to our clients via optimized translation and consultation with our expertise in the field.